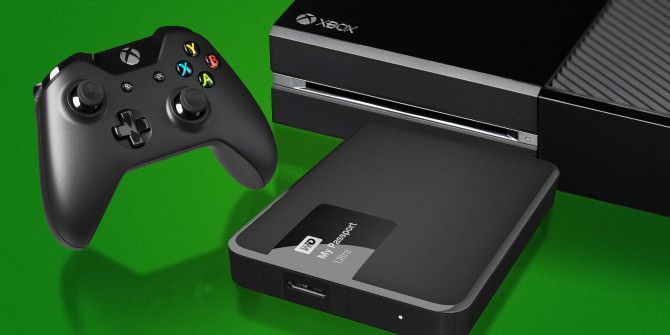 If you’ve had your Xbox One for a while, chances are it’s running low on storage space. Most Xbox One models come with 500GB or 1TB drives, which isn’t much to work with.

Thankfully, you can add some additional space using an Xbox One external hard drive. Let’s look at how to use external drives with your Xbox One, the best external drives to buy, and some important points to know about this feature.

You Can’t Replace the Internal Xbox One Drive

It’s important to note that external hard drives are the only officially supported solution for gaining more Xbox One storage. While you technically can replace the internal hard drive, doing so will void your console’s warranty.

It’s also moderately difficult, so we wouldn’t recommend it unless you’re very comfortable opening up your gadgets. Buying an external drive is a much simpler solution, so stick with that.

In case you’re curious, the Xbox One’s internal hard drive speed is the same in all models, including the Xbox One X. They all pack a standard 5,400RPM drive.

While it might seem counterintuitive, original Xbox One models can actually see better performance when running games from an external drive.

This is primarily because the external drive’s USB 3.0 connection offers faster speeds than the SATA II drive inside the console. Additionally, the external drive doesn’t have to handle console features, like juggling multiple apps and running the OS. Thus, it has more resources to dedicate to games.

Thus, an external drive can make games on your Xbox One faster, but it won’t be a night-and-day difference, especially on the newer models.

You Can Use External SSDs on Xbox One, Too

Most people are interested in buying an Xbox One external hard drive to increase available storage. However, you can purchase an external solid-state drive (SSD) instead, if you prefer.

SSDs are much faster than traditional hard drives, but are more expensive for less storage space. If you have a few specific games that you like to play and want them to load as fast as possible, consider an external SSD. For everyone else, though, the sheer size of HDDs makes them the better value.

External Drives Let You Bring Games to Other Xbox Systems

Modern consoles make it difficult to bring a game over to your friend’s house to play, due to account restrictions and huge file sizes. However, you can use your external hard drive to easily play installed games on another Xbox One.

The only requirement is that you’re logged into the account that owns the games. As long as that’s the case, you can enjoy the Xbox games installed to your external drive on a friend’s console. If the games are disc-based, you’ll also need to insert the disc to play them.

Read more: How to Gameshare on Xbox One

The requirements for Xbox One-compatible drives are pretty lenient. The Xbox Support page for external storage troubleshooting notes the following:

Any drive inside these parameters should work fine. Pretty much all modern external hard drives are at least 500GB and use USB 3.0, so you shouldn’t have much issue finding a compatible unit.

The Best External Hard Drives for Xbox One

Not sure which drive to pick up for your Xbox One? See below for a few recommendations.

While shopping around, you might notice official Xbox-branded Seagate drives. We recommend avoiding these; they’re more expensive than comparable drives while offering no additional value.

For the average gamer, this 2TB WD drive strikes a great balance of affordability and space. Its small profile means you can plug it into the back of your Xbox One, set it on top of the system, and forget about it.

If you like this drive but need more or less space, you can pick it up in sizes ranging from 1TB to 5TB. 4TB is a better choice if you have lots of games and don’t want to worry about upgrading again in the future.

The Best Xbox One External Hard Drive for Maximum Storage:

If you have loads of games to store, take a look at this desktop Seagate drive for plenty of space. 8TB should be enough for almost anyone to keep their entire Xbox game collection on, and it’s still relatively affordable.

Since this is a desktop drive, it’s not powered over USB like the other options. You’ll need to plug it into a power outlet instead. It’s also larger than portable drives, so make sure you have some extra room for it.

Do you need more Xbox storage but don’t want to break the bank? 1TB is the smallest size of drive that’s worth buying, and this Silicon Power drive has a lot to offer. In addition to its affordable price, the drive has a rugged build and water resistance.

These features, along with the built-in cable storage slot, also make it a great fit for those who travel with their console often.

The Best Xbox One External SSD:

Those who want an external SSD for their Xbox One, instead of an HDD, should look at this drive from Samsung. It’s tiny in size and offers 500GB of speedy storage for your favorite titles.

Of course, an SSD is more expensive per gigabyte than standard hard drives.

How to Use an External Hard Drive on Xbox One

Once you have a compatible drive, using an external drive on your Xbox One is simple. Here are the basic steps you need to know.

How to Set Up an Xbox One External Hard Drive

First, plug the drive into your console. You can use any available USB port; the ones on the back work well to keep the cable out of the way.

After a moment, you’ll see a message appear asking if you want to use the drive for media or games. While you can use an external drive to store music and movies, this isn’t what most people are after. Select Format storage device to format your drive for Xbox One games.

Next, give your device a name. You’ll then choose whether you want to install games on the external drive by default. Based on the speed gains discussed above, this is usually a good idea.

Keep in mind that formatting an external drive for use with your Xbox One will erase everything on the drive, so make sure you’ve backed up any existing contents beforehand.

Also, once you’ve formatted a drive for use with Xbox One, you can’t use it on other platforms (like your PC) unless you format it for those first. Thus, you should dedicate an external drive exclusively for use with your Xbox One.

Managing External Storage on Xbox One

Once you’ve formatted the drive, it’s all set to go on your Xbox One. To manage your storage, hit the Xbox button on your controller to open the menu, then use RB to scroll over to your profile icon and choose Settings. Open System > Storage.

You’ll see a section on the right that breaks down all your connected drives. Select one to see various options, such as setting it as the default install location, viewing what’s installed on it, transferring content between devices, and more.

Your Xbox treats all available storage as one big pool, so in My Games & Apps, you’ll see everything you have installed regardless of where it’s stored. Thus, you don’t need to worry about where a game is saved, unless you want to move it due to speed or space concerns.

Get More Xbox One Storage With an External Drive

Now that you’ve added an Xbox One external hard drive, you should have plenty of room to store your game collection. A few extra terabytes goes a long way, so you shouldn’t have to worry about uninstalling anything until you upgrade to an Xbox Series S or Series X.

Xbox One vs. Xbox Series X: Is It Worth Upgrading?

Do you own an Xbox One? Here, we will look at why upgrading to the Series X may or may not be the best choice for you.