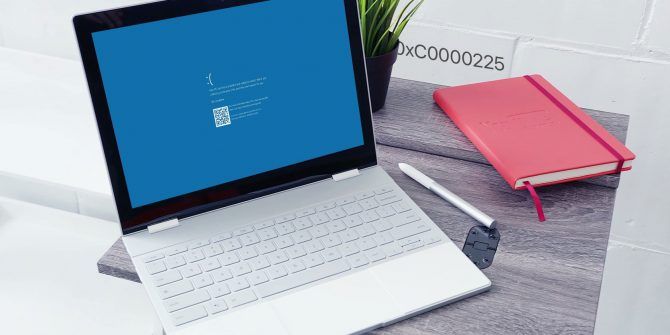 Seeing the 0xc0000225 error in Windows 10 when you try to start your PC? This common error is a huge pain because it prevents your PC from booting into Windows at all.

Thankfully, you can usually fix this error with a bit of work. We’ll show you how to fix error code 0xc0000225 on Windows 10.

You’ll see this error code when you try to boot your PC. Windows displays it with a message saying Your PC needs to be repaired and the vague An unexpected error has occurred. Sometimes it also says A required device isn’t connected or can’t be accessed.

Windows throws this error when it can’t find the correct system files for booting. This vital information is known as Boot Configuration Data, or BCD. When you turn on your PC, BCD tells Windows how to boot properly.

This error is more common on disks that use the newer UEFI specification with the GPT partition scheme than older setups. Windows’ message about it is a little vague, so we’ll need to put on our troubleshooting caps to solve it.

Since this error deals with corrupted system files, it often pops up after an OS upgrade, such as upgrading from Windows 7 to Windows 10. It might also pop up after you install a major Windows 10 update.

Error 0xc0000225 can also occur if your PC shuts down during an important update, from malware attacking system files, or even from faulty hardware.

Follow the below steps to hopefully fix the issue, no matter the cause.

Like other boot errors, you can’t troubleshoot this problem from inside Windows. Thus, you’ll need to have a Windows 10 install disk handy so you can run repair tools from there. Follow our guide to creating Windows 10 installation media to obtain the needed disk.

You’ll need a flash drive with at least 8GB of space, or a DVD. Note that creating the Windows 10 disk will erase everything present on the drive, so we recommend using a blank flash drive or DVD.

Once you’ve created your install media, insert it into your computer. Press the appropriate key to open the boot menu, and load the Windows 10 recovery environment from your external device.

First, you’ll want to try Windows 10’s built-in troubleshooter. This has the system automatically check for issues and attempt to fix them on its own. Hopefully, it will repair your corrupted BCD so you can get back to work.

After booting from your Windows 10 install disk, wait until you see the Windows Setup screen. Confirm your language options, then click Next. When you see the Install now screen, click the Repair your computer link in the bottom-left instead.

If the automatic repair that Windows offers didn’t work, you can try a few important system scans yourself. To do so, repeat the above process to open the Advanced options menu, but don’t select Automatic Repair. Instead, choose Command Prompt to open a command line interface.

First, run the System File Checker (SFC) command, which checks for corrupt or missing Windows system files and tries to repair them.

Read more: What Is the Difference Between CHKDSK, SFC, and DISM in Windows 10?

Use it with this command:

After this completes, run the Disk Check scan to check for errors on your hard disk. Use the following command, replacing c: with the letter of your main partition if you’ve changed it:

Once you’ve run both of these scans, reboot and try to load up your PC normally again. Hopefully, the error won’t pop up anymore.

If you’re still having problems, the next step you can try is a command to rebuild the BCD. Since this is often what causes the error, recreating it might be the trick that fixes the problem.

Again, boot from your Windows 10 installation media and open the Advanced options menu. Select Command Prompt this time, too. Run the following commands, one at a time:

Reboot your computer once more and hopefully, this will clear up the error 0xc0000225 message.

Windows allows you to change the active partition so you can tell the system where to boot from. If this somehow becomes incorrect, you can change it to point Windows to the correct partition.

Go through the above to open a Command Prompt from your Windows repair disk once more. Type the following commands one at a time to open the Disk Partition tool and list your available disks:

Depending on how many drives are connected to your system, you’ll see a series of entries labeled Disk 0, Disk 1, and so on. Your internal hard drive is most likely Disk 0—using the Size, you should be able to tell them apart.

Type the following one at a time, replacing the X with 0 or whatever the number of your primary storage drive:

That second command will show all partitions on your internal drive. Your main partition will be marked as Primary—it’s Partition 4 in the below example.

Then enter these commands, replacing the X with your partition number:

Exit the Command Prompt, reboot, and see if your issue is fixed.

This marks the partition you have Windows installed on as the one Windows uses to boot. If that somehow changed and resulted in the 0xc0000225 error, doing this can put everything back the way it was.

At this point, you’ve done a good amount of the software troubleshooting needed to fix this error. If you still can’t boot into Windows due to error 0xc0000225 , you should consider checking your hard disk for physical issues.

Check to make sure the drive cable isn’t damaged, and reseat it if possible. Depending on your computer manufacturer, you also may have some built-in diagnostic tests that can check for drive issues.

Follow guide to diagnosing a bad hard drive for some tips. If you’ve confirmed that your hard drive is healthy, you’ll have to move to last-resort steps.

If this problem started recently, you can try a System Restore from the recovery disk to go back in time. Boot from your install media again, navigate to the Advanced options menu, and select System Restore. Pick a recent restore point and Windows will return to that point without affecting your personal files.

If you don’t have any restore points or the system restore doesn’t fix the issue, it’s best to reinstall Windows to replace the broken system files and get everything else refreshed. This is time-consuming, but it’s your best bet if you’ve gotten this far and still haven’t fixed the problem.

You’ll find a Reset this PC option under Troubleshoot on your recovery disk menu. Follow our guide to resetting Windows 10 for more information.

Hopefully, one of these methods will clear up error 0xc0000225 on Windows 10 for you. Whether this was caused by a botched upgrade or hardware error, you thankfully have options to patch it up.

Meanwhile, there are separate fixes to try if your Windows system boots slowly, even after fixing this problem.

Ben is a Deputy Editor and the Onboarding Manager at MakeUseOf. He left his IT job to write full-time in 2016 and has never looked back. He’s been covering tech tutorials, video game recommendations, and more as a professional writer for over six years.